Dutch Prime Minister Mark Rutte (left) chats to US President Joe Biden in the Oval Office of the White House in Washington, on Tuesday. Photo: AP

Dutch Prime Minister Mark Rutte’s trip to Washington this week is the latest effort by Europe to ease unprecedented US demands for manufacturers based on the continent to buttress the Biden administration’s ban on exports of chip-making tools to China.

The growing friction between the allies may allow Beijing to triangulate Brussels against Washington, especially given the economic interdependencies between Europe and China – but EU-China relations are fraught with tensions, too.

China now accounts for almost 35 per cent of the global market for semiconductors, reflecting sales of finished chips to companies that have large manufacturing operations concentrated in China. But the United States and, increasingly, Europe dominate in chip designs and manufacturing processes – at least for the moment in a rapidly-evolving industry.

Washington wants to ensure its own lead by preventing China from quickly acquiring technologies used in weapons systems, supercomputing and artificial intelligence. It also wants to protect itself against supply-chain vulnerabilities, another national security priority.

A slew of proposals announced by President Joe Biden last October seeks to do so, first, by pressuring allies not to share with China any manufacturing technologies based on US technologies and, second, by barring through licensing requirements any “US persons” or US-based companies from providing semiconductor-related assistance to China.

On another front, the Chips Act, enacted in August, provides financial support to widen the global lead of the US semiconductor sector over competitors, a neo-mercantilism endeavour to dominate the US$590-billion industry. 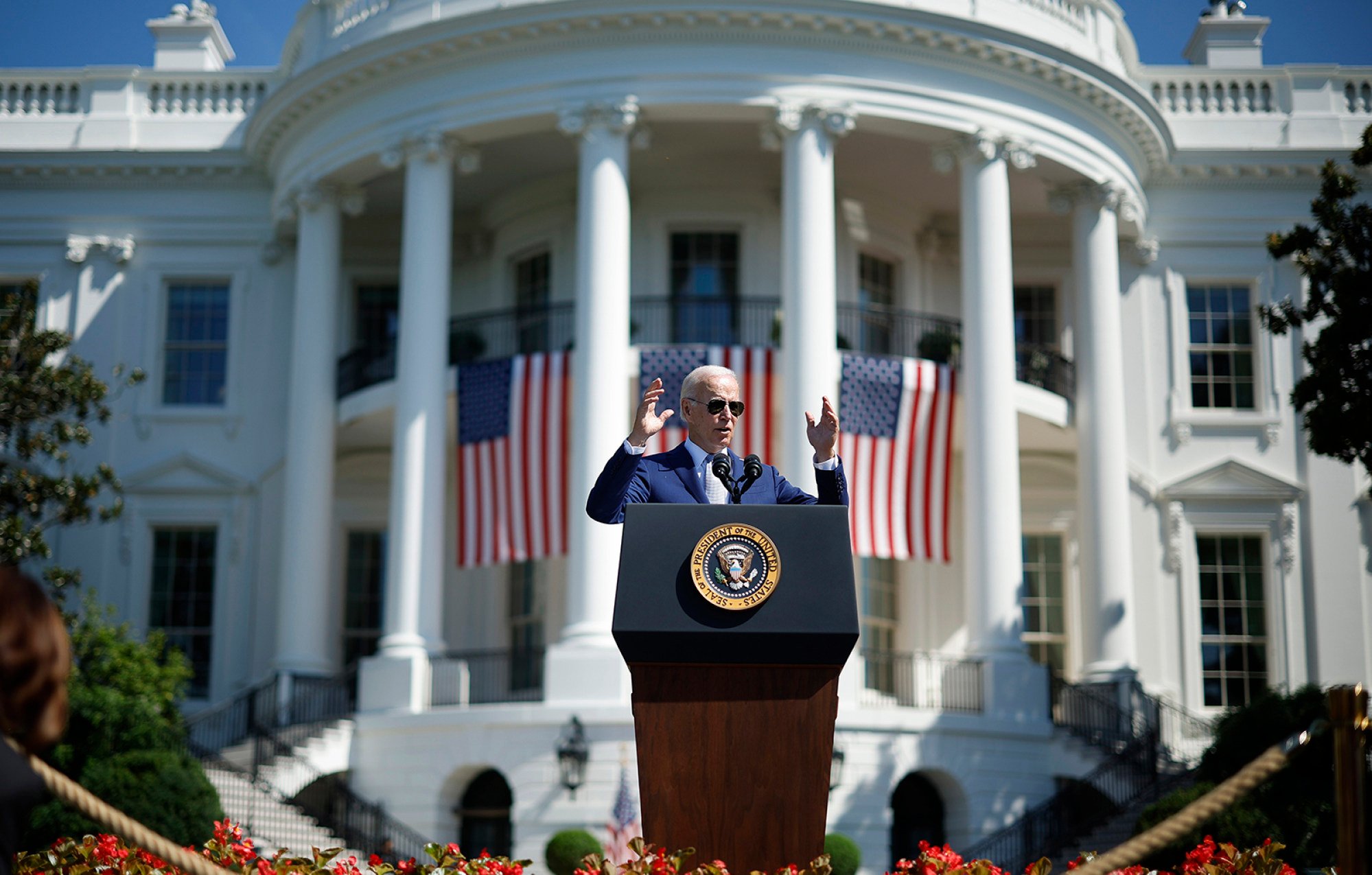 US President Joe Biden speaks before signing the Chips and Science Act during a ceremony at the White House in Washington on August 9. Photo: Getty Images/TNS

Earlier, in February, the European Union cleared a similar funding initiative providing 43 billion euros (US$46.6 billion) in aid to build plants in Europe. Brussels pointed to America’s control of 65 per cent of data processing revenues in expressing its mission to double the EU’s share of global chip manufacturing to 20 per cent by 2030. But it is now struggling over how to sacrifice other programmes to free up funding.

The ban and neo-mercantilism define a new era of relations among the world’s largest powers by positioning technological prowess as critical to defence preparedness. The policies also complicate diplomacy between the US and its allies.

Brussels was testy with Washington over the Inflation Reduction Act, also passed in August, a massive US$738 billion juggernaut aimed at curbing inflation and expediting clean-energy deployment for autos. The tax breaks and incentives were discriminatory and breached international trade rules, the EU charged.

But the rancour had grown by December, when French President Emmanuel Macron met Biden, clearly rankled over the “buy American” initiatives that are cornerstones of his administration’s re-election strategy. Macron saw the protectionism as “fragmenting the West”. In response, Biden promised “tweaks” to the law. Meanwhile, President Xi Jinping held talks with the European Council president Charles Michel.

While the US insists there is “growing convergence” with the EU, the Netherlands has stepped up warnings about the impact of the American bans on Europe’s economy, particularly the Dutch companies ASML and ASM International.

Like others in Europe, Dutch economy minister Micky Adriaansens believes Europe and her country “should have their own strategy”. Stressing that relations with China are “very positive”, that the Netherlands does “a lot of business with China”, she insists that a European approach must take into account the risks to “specific products and value chains”.

China accounts for five per cent of Dutch exports and 11 per cent of its imports. For Europe as a whole, the value of goods the region trades with China reached 696 billion euros (US$754 billion) in 2021, up roughly 25 per cent from 2019, according to Eurostat. China is the third-largest destination for EU goods exports, accounting for 10 per cent of the total, while also being Europe’s biggest source of imports, a 22 per cent share in 2021. Oil and natural gas shipped from Russia to China was diverted to Europe last year to narrow the demand-supply gap that drove up prices.

Officials and think tanks often say the interdependencies are “too big to fail”. These entanglements also give Beijing and Brussels leverage over each other, especially now, given the economic vulnerabilities challenging both regions.

But Brussels has issues with Beijing. “On the European side, market access is very open, whilst in China, several sectors remain much more closed,” Michel said. “We need greater reciprocity. We need a more balanced relationship.”

All said, though, the efforts by Brussels and leaders of EU member countries underscore how Europe is broadening its “own” strategy towards China, with its pressure on Washington to allow flexibility on business with Chinese companies.

The dynamics are unfolding as they did when Henry Kissinger used triangular diplomacy during the Vietnam war by exploiting the rivalry between the Soviet Union and China, “pursuing strategic alliances or economic deals in an attempt to both weaken the hegemony of a powerful adversary and strengthen their own position”, as Kissinger wrote. This time, though, two close allies are involved.